What Made Denali So High?

The main attraction of Denali National Park is Denali, the most prominent and tallest mountain in the Alaska Range. At 20,310 feet of elevation, the summit of Denali is higher than any other mountain in North America, and visitors come from all over the world for a chance to see it on a clear day.

It took millions of years for Denali to reach its current height, and the science of plate tectonics can help to explain how it all happened. The entire surface of the earth is separated into a few major plates. These plates are much denser than the molten rock that lies beneath them, and as a result these plates “float” and move over time, albeit very slowly. The Pacific Plate for example is moving northwest at a rate of about 7 centimeters per year, which is about as fast as fingernails grow. 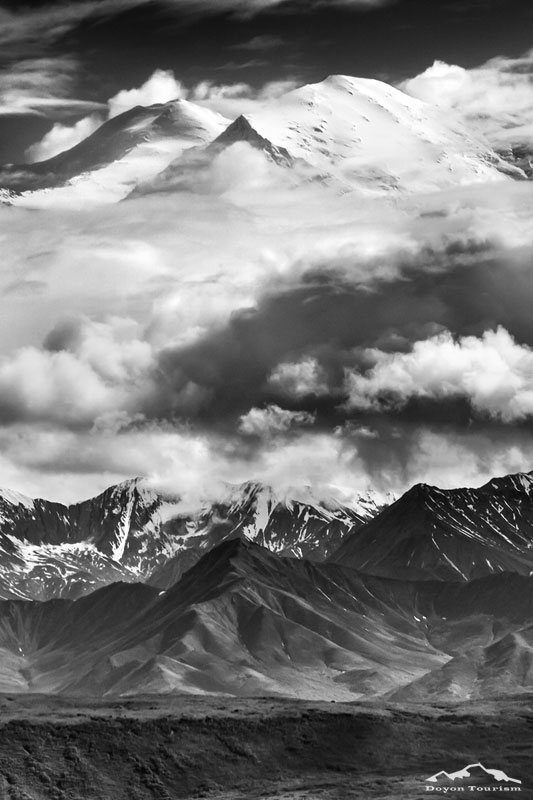 As two continental plates bump into each other, the edges of the plates can fold and crumple up. This works much like if you were to take a piece of stiff construction paper and push the ends toward each other. This slow but steady collision causes thousands upon thousands of earthquakes that eventually result in mountain ranges like the ones you see in Alaska.

A fault is a break in the earth’s crust. When there’s enough pressure pushing against a fault, rocks on either side can slide past one another during earthquakes. There are two major faults that contribute to Denali’s height: the Denali Fault and the Hines Creek Fault, both of which run through Denali National Park. The Denali Fault in particular is distinct since there is a large bend in the fault where Denali sits. This bend causes rocks to cluster. This cluster of rocks is one of the reasons why Denali is so tall.

The composition of Denali is also an important factor as the mountain is mainly made up of granite. Granite is less dense than other types of rocks, and granite tends to “float” above other rocks in the earth’s crust. To add to that, granite is also very resistant to erosion. The surface of the mountain is constantly eroding due to wind, ice, and water; however, if Denali were made up of a different type of rock, it would likely face much more erosion.

Even with the threats of erosion, the Alaska Range was able to rise far beyond many other mountain ranges, and Denali is still growing even now. Scientist estimate that Denali rises at a rate of half a millimeter every year, and in two million years, Denali will be full kilometer taller than it is today.

2 thoughts on “What Made Denali So High?”

This site uses Akismet to reduce spam. Learn how your comment data is processed.